Three summits tour on the edge of the Gesäuse National Park

The Kaiserau is located near the pass between the Palten valley in the south and the Enns valley in the north, which connects the villages Admont and Trieben. In winter, a small ski area on the high plateau at 1100 m (3608 ft) above sea level mainly attracts locals and in summer various hiking trails invite you to explore the fantastic mountain scenery. One of them on the hike over the Kreuzkogel (2011 m / 6598 ft) and the Riffel (2106 m / 6909 ft) to what is probably the most striking peak in the Admonter Reichenstein Group, the Admonter Kalbling (2196 m / 7205 ft).

The starting point of the tour is the Kaiserau car park. From here, a gravel forest path leads at first very leisurely in the direction of the mountain peaks towering in the distance.

After a little over a kilometer (0.62 mi), a trail branches off to the left. According to the signpost, this path continues to the Kreuzkogel. After another 500 meters (0.31 mi) or so, you have to leave the forest road and take a narrow path to the right into the forest. The path meanders through the forest and from now on it goes steadily uphill. After 1.5 hours the Scheibleggerhochalm is reached. The well-trodden path leads further up over the pasture. Apart from grazing cows, Alpine chamois also cavort on the slope up to the Kreuzkogel. The closer you get to the summit, the rockier the path becomes. After another hour, the summit cross can finally be seen and the last few meters are an almost relaxing walk to the first summit of the tour.

The panorama at the summit of the Kreuzkogel (2011 m / 6598 ft) is terrific. In the west, the Bosruck and the peaks of the Totes Gebirge protrude from the fog and in the north the Haller Mauern live up to their name and look like a massive wall, while in the south the Rottenmanner Tauern, which are already clearly visible during the ascent, seem close enough to touch. 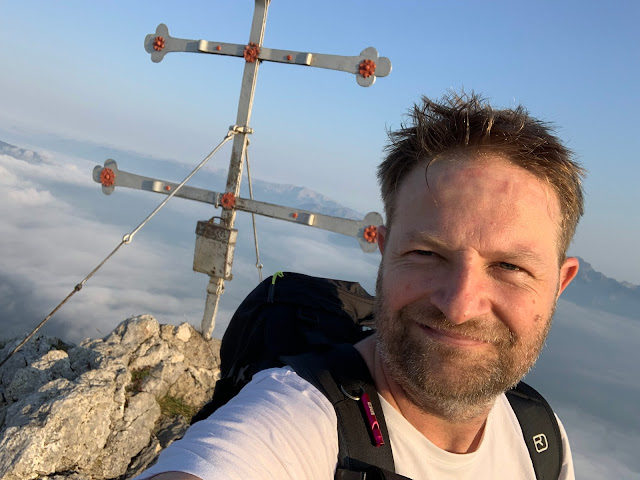 First you go back the same way, but after a short time you choose the left path at the fork in the path, which leads along the ridge in the direction of Riffel. The path is initially almost leisurely, although there are a few places along the steep slopes that have to be overcome with great caution due to the loose gravel. 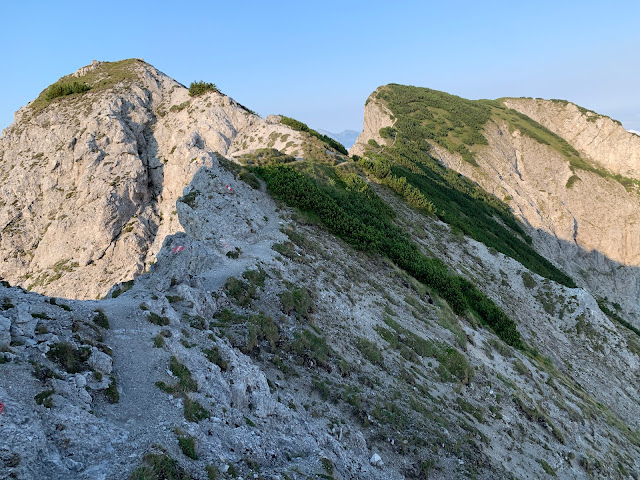 But it soon becomes clear why this part of the tour is considered the most difficult. About halfway to the Riffel, the path along the ridge diverges to the southern flank of the ridge. Along the steep slopes there are some rather impassable passages. Due to a fatal accident, the most exposed areas were secured with steel cables. Nevertheless, great caution is required. 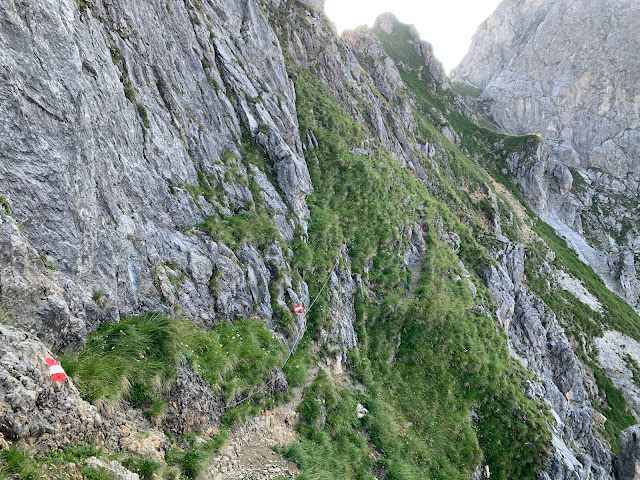 Shortly before the summit of the Riffel, the Riffelspitze, things get exciting again. A rock face has to be overcome in easy climbing (I+), with loosely tensioned steel cables making the task even easier. But beware: the danger of falling rocks should not be underestimated on this section. 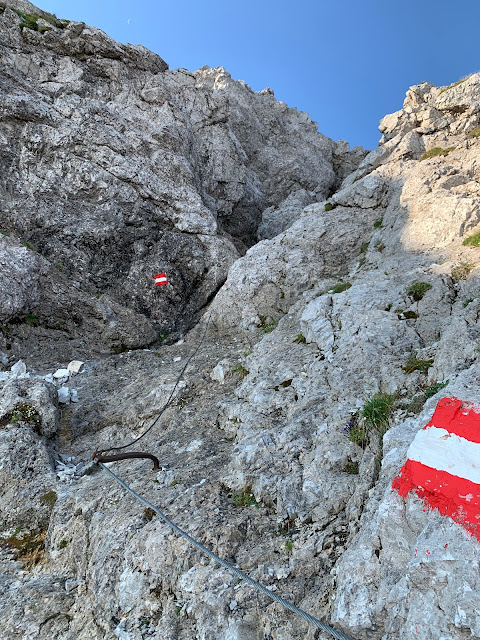 The ascent to the Riffelspitz (2106 m / 6909 ft) is definitely worth it. The hike along the ridge took about an hour. The view of the surrounding mountains is beautiful. 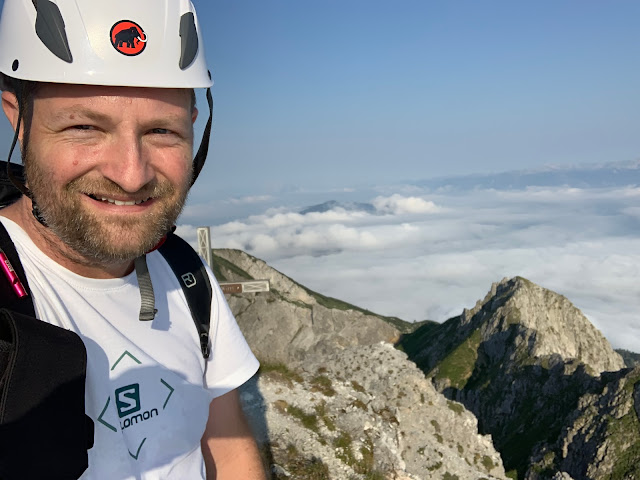 Equally impressive is the view back on the path along the ridge that has already been covered. 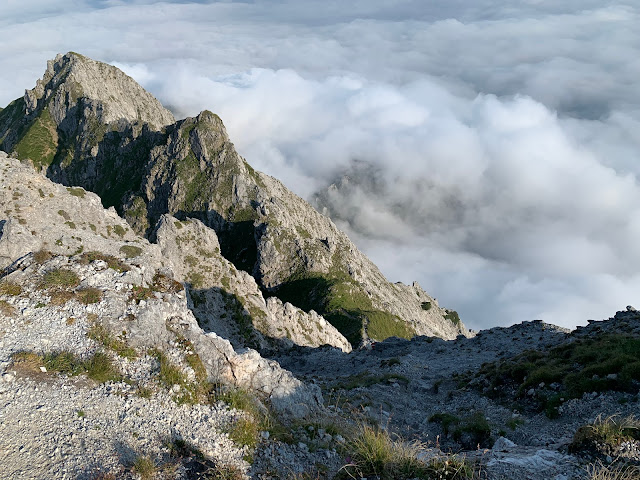 From the summit of the Riffel, new views open up. In addition to the previously mentioned view of the Bosruck, the Haller Mauern and the Rottenmanner Tauern, there is now a view of the meadow-covered saddle between Riffel and Admonter Kalbling, whose rock faces drop steeply to the north and whose summit towers imposingly in the south.

A leisurely descent into the saddle follows before the stony path leads up to the Admonter Kalbling in tight serpentines. The last section leads straight up to the summit cross of the Admonter Kalbling (2196 m / 7205 ft) which is only visible at the last moment. From here, the entire path that has already been covered can once again be viewed from above. In addition, the summit of the Sparafeld (2247 m / 7372 ft) seems within reach and in fact a detour to this fourth summit would be quite possible. 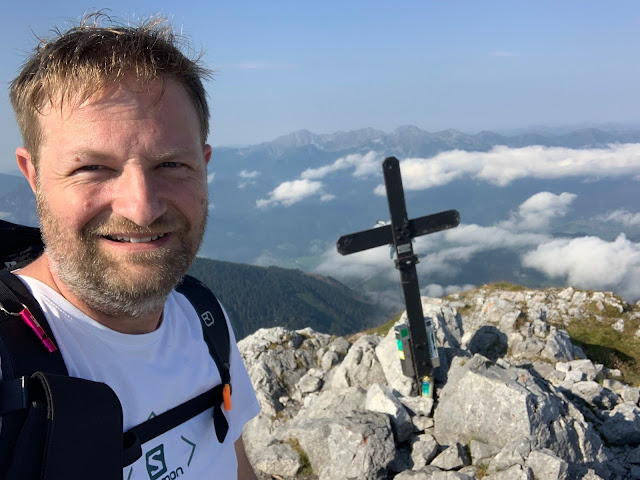 But not today. The descent into the saddle takes place via the same path, but instead of climbing up the Riffel again, the path continues in the direction of the Klinkehütte. The way down to the hut is not particularly difficult. The large amount of gravel still requires sure-footedness. On the way back there are always great views of the mountain peaks visited. 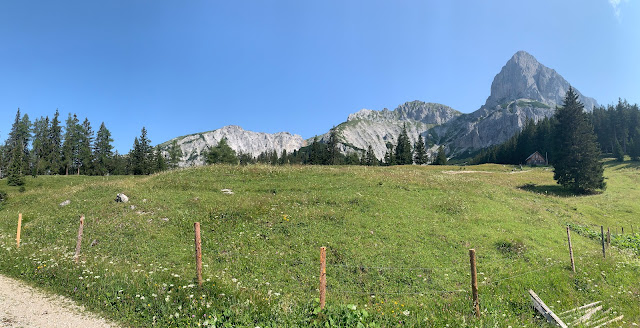 From the Klinkehütte, a narrow path leads further down through the forest in the direction of Kaiserau, the starting point of the tour. After crossing the toll road and two river beds, the path widens again and finally leads to the gravel forest road, which leads directly back to the parking lot.