Ridge walk on Bosruck between Styria and Upper Austria

The westernmost peak of the Ennstal Alps, the Bosruck (1992 m / 6536 ft) marks the border between Upper Austria in the north and Styria in the south. Not least because of the 5.5 km (3.4 mi) long road tunnel through the Bosruck, which was opened to traffic in 1983, the striking mountain is known to many people. Nevertheless, the mountain is anything but overcrowded and perhaps that is why it is a worthwhile destination for people who want to enjoy the magnificent view from the summit after a varied and quite demanding ascent.

Popular starting points for climbing the Bosruck are the Bosruckhütte on the Upper Austrian side and the Ardning Alm Hütte on the Styrian side. This time, the choice fell on the latter because it is the start and finish of an attractive circuit that includes crossing the Bosruck.

After parking the car in front of the Ardning Alm Hütte, the first stage takes about 50 minutes along a gravel path, followed by a narrow path up the meadow to the Arlingsattel. Here the path turns left and leads straight into a mountain pine alley. This runs along the ridge and is a bit steeper in places. Alternating views of the Upper Austrian or the Styrian side open up. After about 45 minutes you reach the entrance to the Wildfrauensteig, a via ferrata with difficulty level B/C. Before you get on the via ferrata, you can make a small detour to the left to the Wildfrauenhöhle (wild women's cave), from where, according to a legend three "Wildfrauen" charitably protect people and animals high up on the north-east ridge. Right at the beginning, the via ferrata leads up the striking wind gap, with two quite exposed key points (B/C) to be overcome. 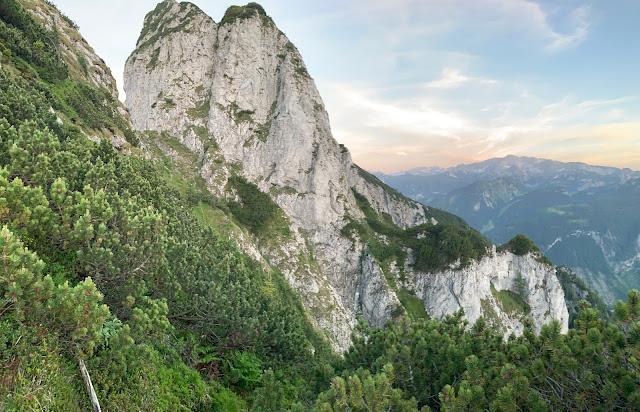 The next mighty rock pillar is bypassed on the right and finally the climb leads up to the summit of the Frauenmauer (1835 m / 6020 ft), whereby the quite airy and partly exposed path is not continuously secured with a steel cable and can be very uncomfortable, especially when it is wet . 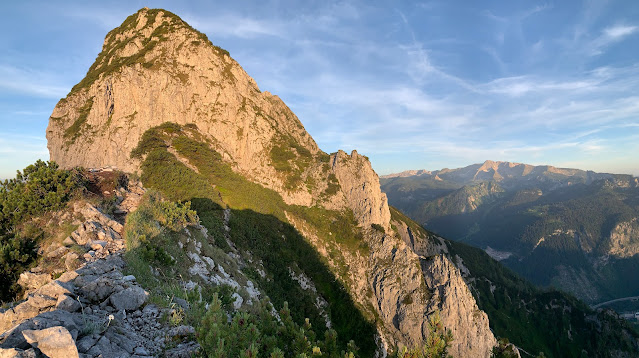 The summit of the Frauenmauer was reached after about 2.5 hours and literally invites you to take a short break. 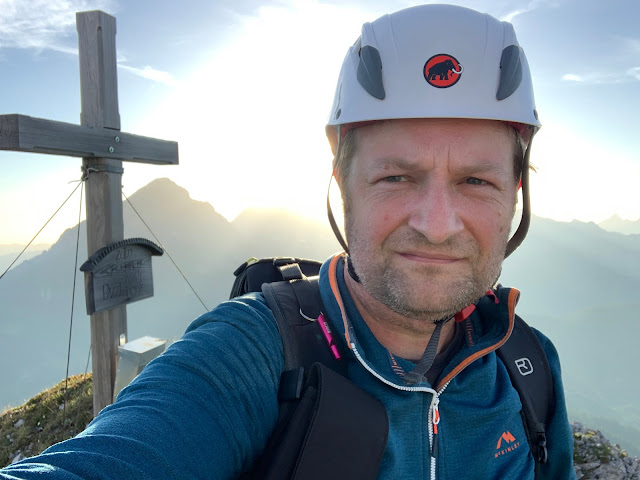 A partially unsecured descent of the first level of difficulty follows, before continuing along the ridge, which is quite exposed. The trail often deviates to the north flank of the ridge. Sure-footedness and a high degree of concentration are absolutely necessary here. Fixed steel cables are only attached in some particularly dangerous places. 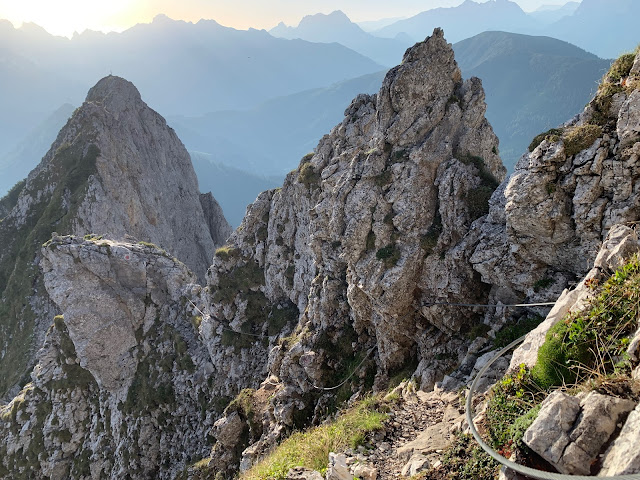 The path becomes a little more pleasant and runs along steep slopes and through gullies in a larger arc along the north flank to the summit of Bosruck. Apart from the path, which is well marked with dots, the summit cross, which is now clearly visible, shows the way. 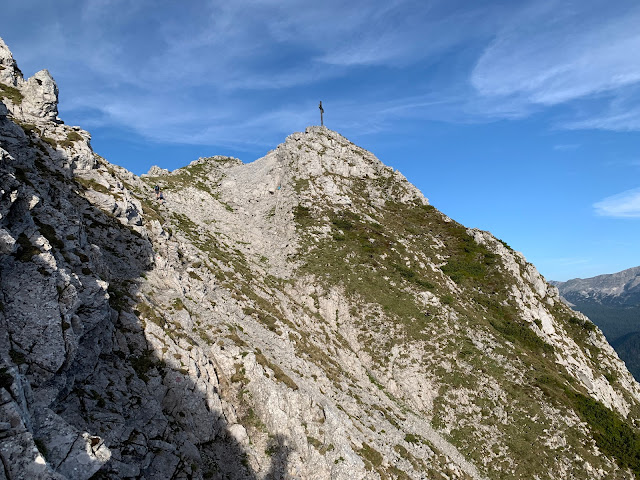 After around 3.5 hours you stand in front of the mighty summit cross of the 1992 m (6536 ft) high mountain. Even during the ascent, the far-reaching views were terrific, but now you should allow yourself enough time to enjoy the magnificent panorama. 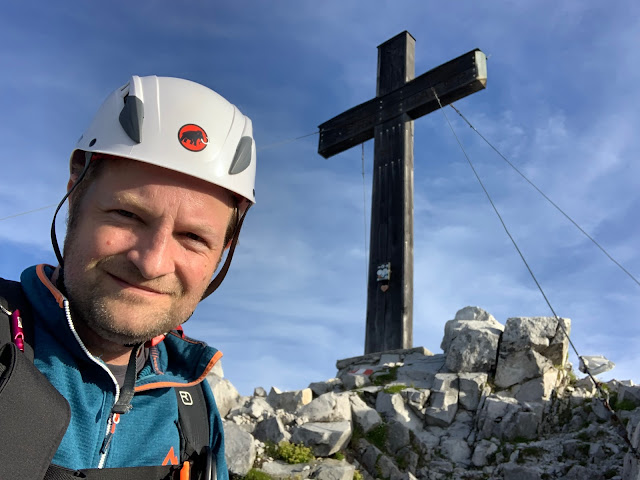 The Enns valley is literally at your feet. In the east, the imposing mountains of the Geäuse can be admired. In the northwest you can see the Wurzeralm and the foothills of the "Totes Gebirge". A little further in the background, the distinctive Grimming marks the beginning of the Dachstein massif and the Dachstein Glacier itself shimmers white on the horizon.

The trail continues moderately steeply downhill. First over rough scree on the north flank, then largely on the rather steep, southern slopes of the ridge towards the next stage destination, the Kitzstein (1925 m / 6315 ft). 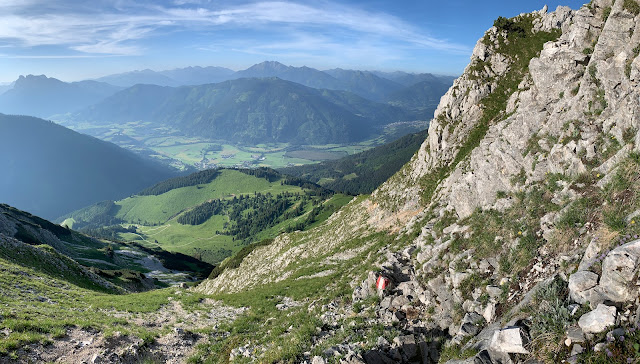 The path is extremely scenic. But the gentle impression is deceptive. The often very narrow path along the slopes once again requires full concentration. One wrong step could be fatal. Only one particularly dangerous point is secured with a fixed steel cable. Finally, a last ascent to the last summit of the Bosruck crossing has to be overcome and after 45 minutes you are at the last summit of the tour. 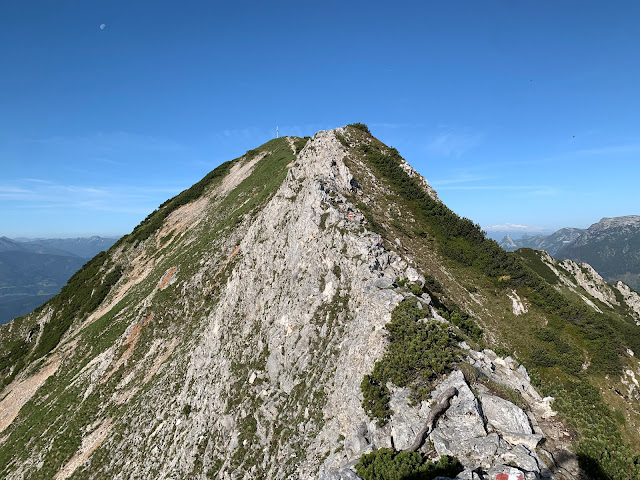 The descent is in a southerly direction through mountain pine terrain, steep meadows and a scree gully to a gravel path. 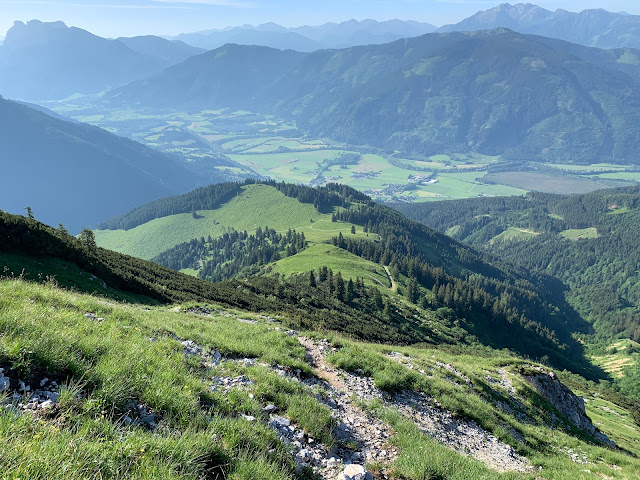 This is followed by a leisurely walk across alpine pastures back to the Ardning Alm Hütte. Impressive views of the Bosruck open up again and again, which invite you to review the crossing you have just mastered. 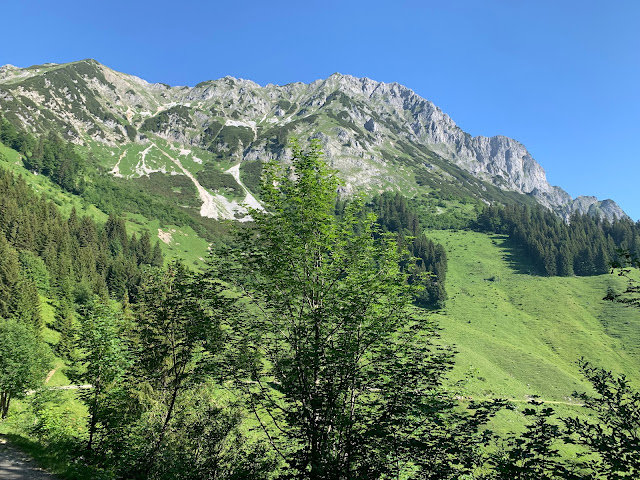 After around 1 hour and 45 minutes you will return to the starting point of the tour. A visit to the Ardning Alm Hütte is the well-deserved conclusion of an exceptionally impressive but also demanding tour.