Coming from the east of Austria, the Schneeberg massif can be seen from afar. The Schneeberg rises imposingly and thus exerts a real attraction on the people in eastern Austria and the neighboring countries in the east. Accordingly, many visitors dare to climb up, especially in the summer months, to enjoy the beauty of the high plateau and the magnificent views.

The starting point of the tour is the picturesque village of Schneeberg not far from Puchberg. If you drive past the fire station on the right coming from Puchberg, there are a few free parking spaces on the left. Starting from the car park, return to the fire station to hike along the forest road into the Mieseltal. The path is very leisurely at first and only turns sharply to the right after about two kilometers. A signpost points the way to the "Unterer Herminensteig". The forest road has now given way to a forest path, which now leads noticeably steeper up the mountain.

The trail is marked red throughout. The cliffs, which can only be seen at a distance on the right-hand side, move closer and finally appear in front. Arriving at the foot of the rock face, the most adventurous section of the lower Herminensteig begins: a climbing section with difficulty level 1+. Don't be fooled by the sight. Seen from below, this initially looks simpler than it is. If you don't want to climb the two roughly 8 meter high steep steps, you can bypass this point on the marked path. The first steep step of the climbing section is not too difficult. There are enough steps and handles, although it is a bit exposed. A head for heights is therefore a prerequisite! After a little walking area, the second steep step follows. You have to climb very steeply up through a gully, whereby hanging ropes make the task a little easier. The subsequent crossing is quite exposed and requires full concentration again. 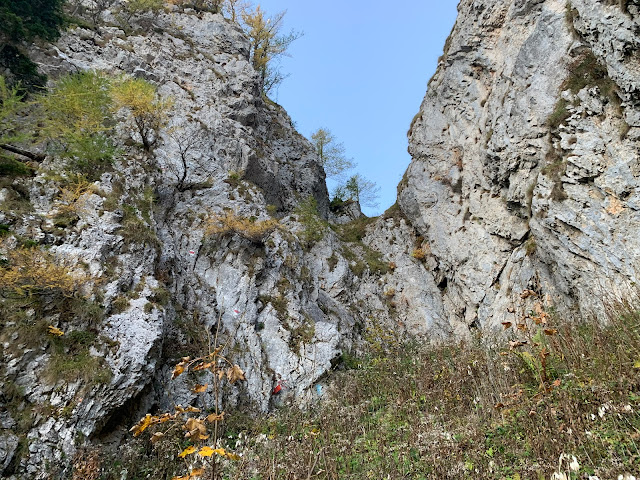 Then it's not difficult on the marked path to the junction with the northern Grafensteig. When you get to the crossroads, a signpost once again points you to the right. Along the Grafensteig you now go to the upper Herminensteig. The Grafensteig itself allows you to take a breather, so to speak. Rather comfortably, it nestles against the slope, sometimes going uphill, sometimes downhill. 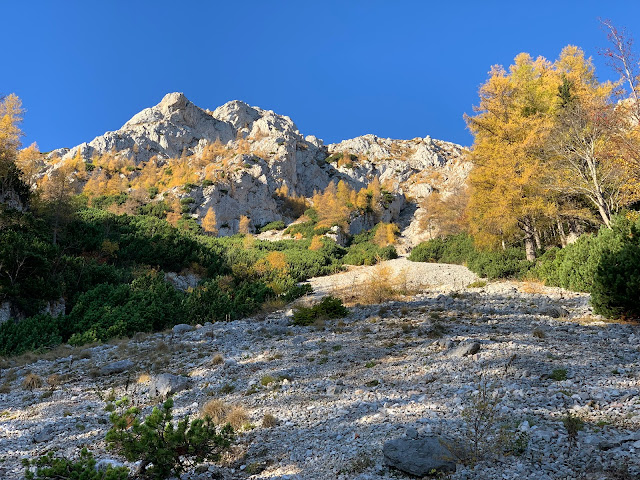 The turnoff to the upper Herminensteig can't really be missed. The path to the left is steeper again towards Waxriegel. The path gets rockier and the trees get smaller and are increasingly being replaced by dwarf pines. The terrain quickly becomes more open and exciting. 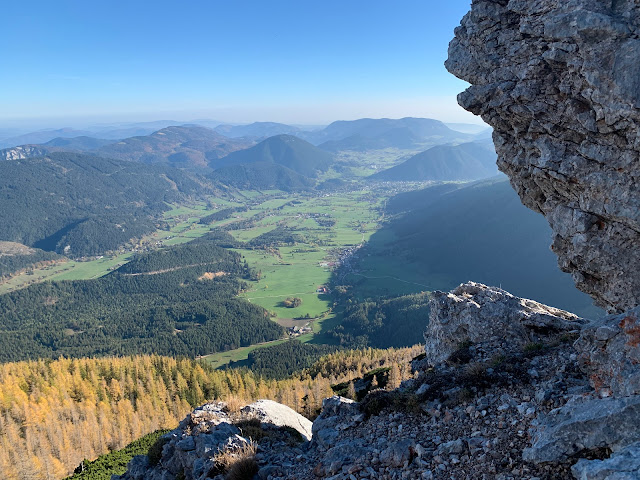 There are increasingly great views towards Puchberg and the surrounding mountains. The path itself requires the use of hands from time to time, but is not really difficult. As the altitude increases, the scrambles over the larger rock pillars on the ridge become a little more challenging. The landscape is becoming more and more impressive and in addition to great views of the Nandlgrat and the Breite Ries, there are also one or the other impressive view down.

The climb becomes increasingly steeper until finally the Schneeberghaus comes into view on the left side and the last rock formations have to be overcome before you go through a passage and a quite exposed point (secured with a fixed steel cable) to get out of the Herminensteig. 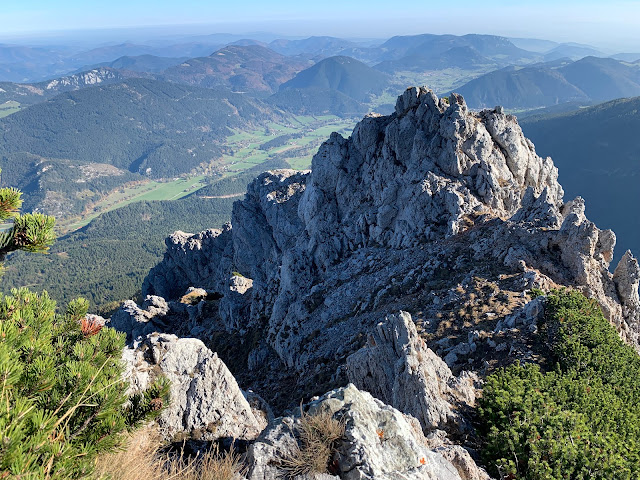 Arrived at the high plateau, it's easy to continue to the summit cross at the 1888 m (6194 ft) high Waxriegel. 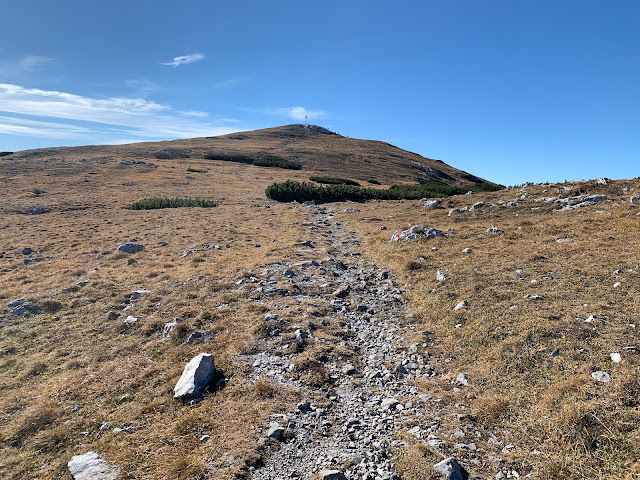 You always have the Ochsenboden and the peak of the Schneeberg rising behind it, the 2076 m (6811 ft) high Klosterwappen in view. 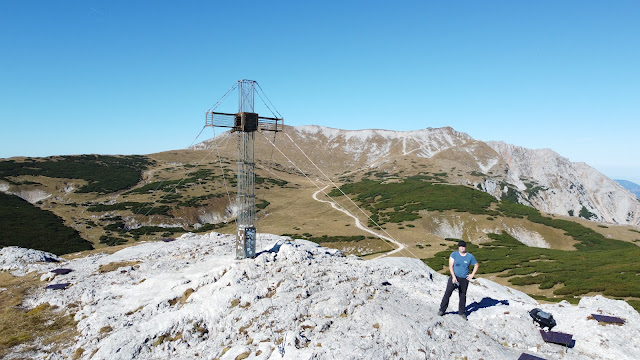 If you don't make a detour to the Klosterwappen, you hike across the meadow and between mountain pines back onto the forest road. After a partial circumnavigation of the Waxriegel summit, you can see the little Elisabeth church. Here you cross the tracks of the Schneebergbahn and follow the well-marked path in the direction of Puchberg. 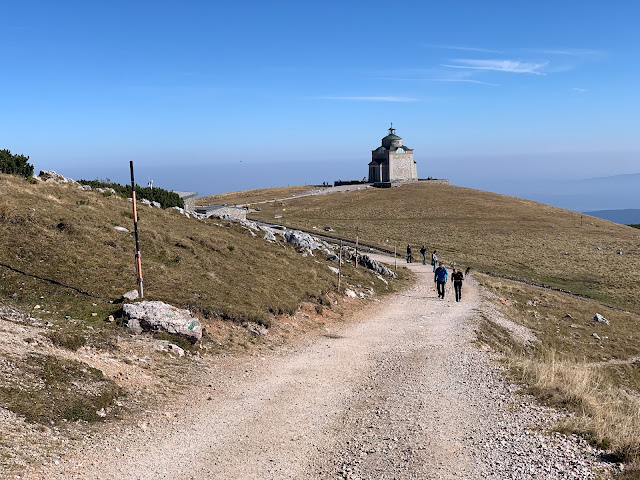 From now on it's steadily downhill. The path is quite rocky but fortunately comparatively not slippery. Finally the pines give way to the trees and the Baumgartner stop can be seen. It goes further down to the repeated crossing of the track system. 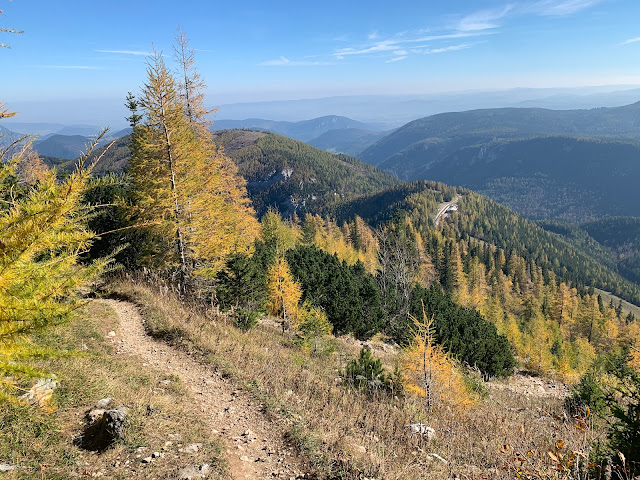 Parallel to the train, the path now leads to the Baumgartner stop. Passing this, we continue in the direction of the Kaltwassersattel, where the path branches off rather inconspicuously to the left (onto the railway embankment), crosses the tracks once more and finally leads to the path down into the Mieseltal and thus into the Schneebergdörfl.